History of the park

Discover the secrets of Paeroa’s maritime past

The organisation was formed by a group of people lead by Mr Alan Brimblecombe in the late 1970s in Paeroa, with the idea of salvaging the Paddle Tug “Kopu”. The land was originally covered in gorse and rubbish, and the group’s base was the old Ministry of Works workshop and slipway.

Within two years the organisation had a good number of members and in 1976 was registered as a society, as the Historical Maritime Park Society Incorporated. Part of the Thorp Grant was donated to the society in 1980, and the unwanted Public Works building (ex. Waitekauri Post Office and telegraph office 1897 – 1912) was given to the society for an office and museum, which was opened in 1980.

The history of the Paeroa river port: timber, flax and gold

The Coromandel and Hauraki Gulf have a long history of navigation, being a likely place of first landfall for waka around 1250–1300. The Waihou River was a ready-made highway and the vast swamp around it that is now the Hauraki plain was a rich source of food.

The remains of many settlements are found along the Waihou, mostly at the northern end. In these wetlands, ‘dry living floors were highly sought after’. Closer to Paeroa, archaeological investigation has shown that large middens found near the original meeting place of the Ōhinemuri and the Waihou Rivers mark the site of Te Raupa pā. Missionary Samuel Marsden had visited the local ariki (chief) there in 1820 and it was then said to be the largest swamp pā on the Waihou River. Opitau pā was located on the opposite side of the river.

In November 1769 Captain James Cook spent two days on the Waihou River. Botanist Joseph Banks was impressed and declared the Hauraki Plains to be ‘the properest place we have yet seen for establishing a colony’. They believed the tall kahikatea trees would make good masts and were impressed by good anchorages and fertile soils. Kahikatea proved to be more suited to butter boxes than ships’ timbers but their glowing reports drew Europeans to Hauraki for its timber. They began buying land that would allow water access, including at Hikutaiā and Paeroa. Auckland businesses were eager to buy timber and Hauraki Māori sold cutting rights to individual trees in the 1850s and to entire forests from 1860 to 1875

The rivers were a focal point of the shipping industry from the very early days of the colony. Hauraki Māori supplied Auckland’s early settlers with fish, vegetables and fruit which they brought over in their canoes from Thames and the Waihou River. In the 1840s and 1850s they invested in schooners and cutters for their trading ventures which also included flax.

When goldfields opened in Waihi, Ōhinemuri and Karangahake in the 1870s the only access to Auckland was by water. Paeroa became a busy river port, nearly 30 kilometres inland but ideally placed on flat land on the edge of the vast swampland and at the meeting place of both the Ōhinemuri and Waihou Rivers. The rivers are tidal at Paeroa which also helped movement of the flat-bottomed scows up and down the river.

Mining increased the demand for timber and in 1875 a timber mill was established in Paeroa milling kahikatea. The first wharf to take out the gold and timber was set up on the Ōhinemuri River in Wharf Street, Paeroa, but the deforestation, mine waste and dredging upriver quickly caused it to silt up. The port was moved to the end of Junction Road in about 1894, but silting continued and it was again moved, this time to the old Te Puke Wharf located at what is now the Historical Maritime Park. By the 1890s Paeroa had become a busy river port, taking gold out to Auckland and bringing in machinery and men for the mines. The importance of the port began to be lessened by the opening of a railway connecting Thames and Paeroa to Hamilton and the North Island Main Trunk Line in 1895. Silting of the river continued and by 1913 Te Puke Wharf became unusable. The present wharf was built below the Ngāhina Bridge on the Waihou River in about 1911. 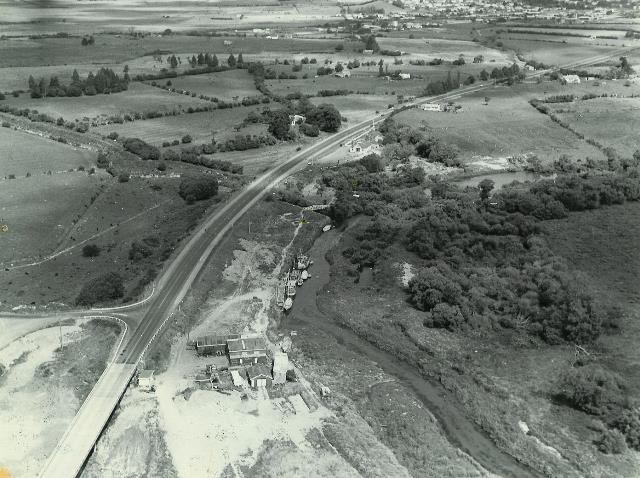 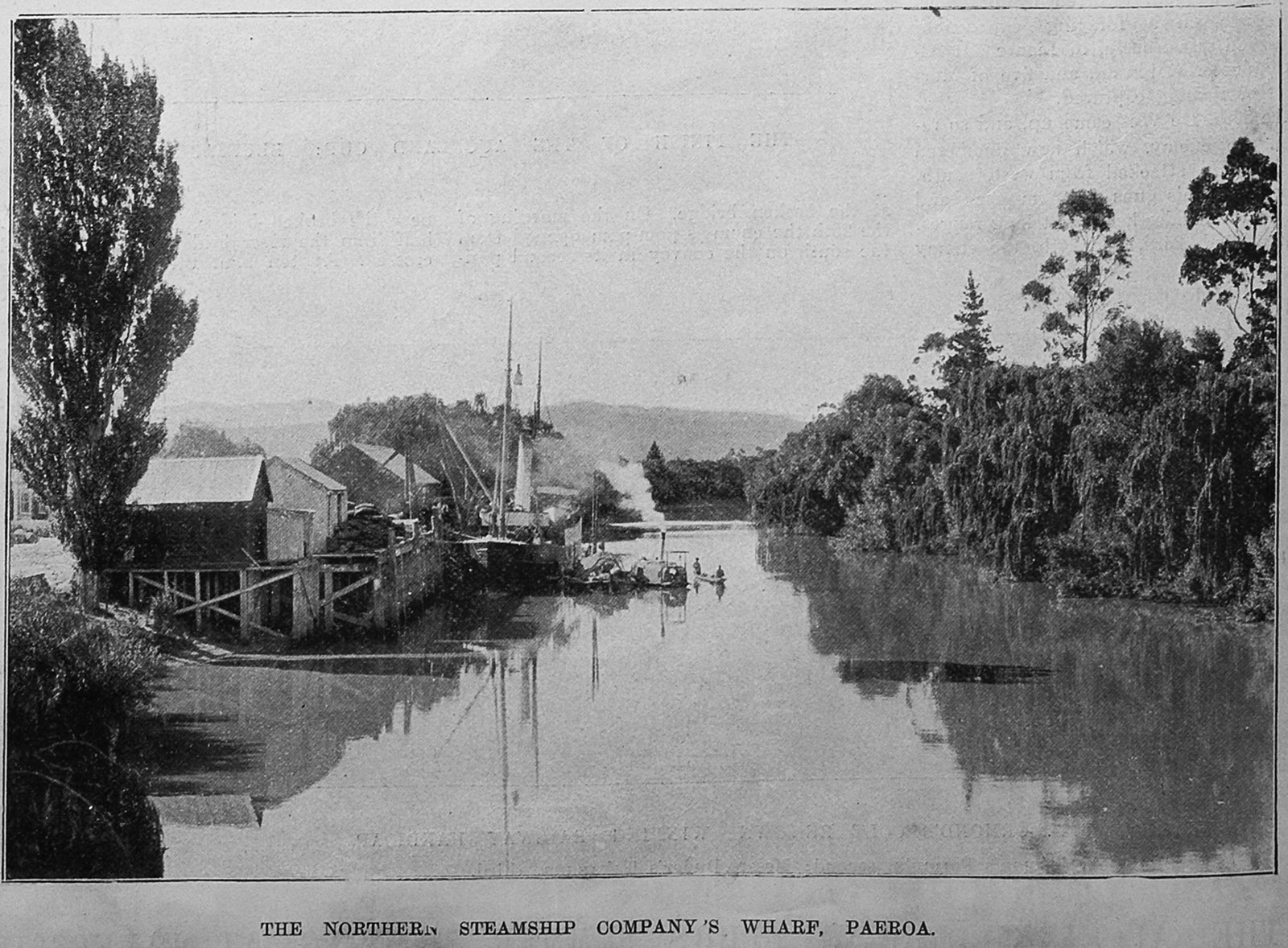 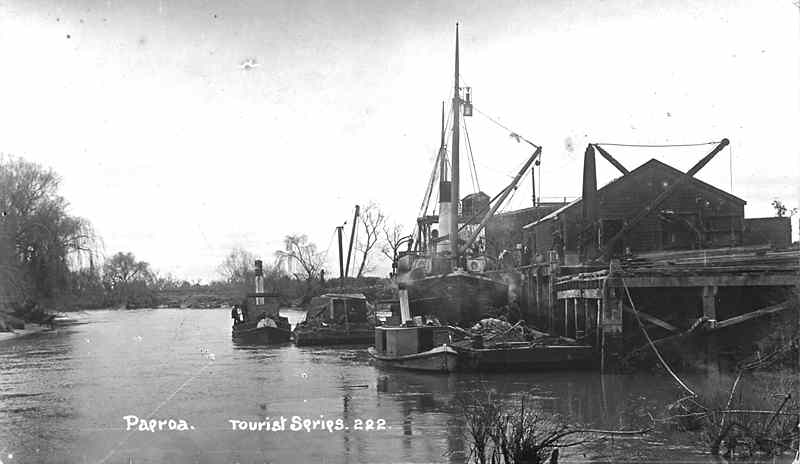 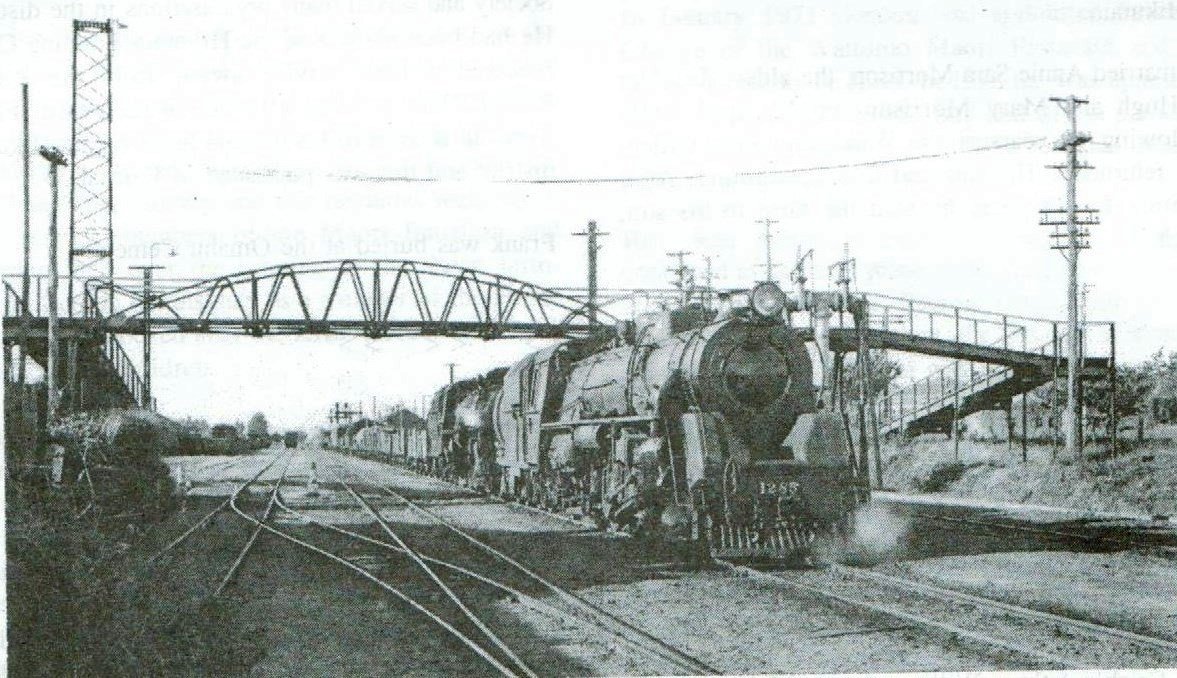 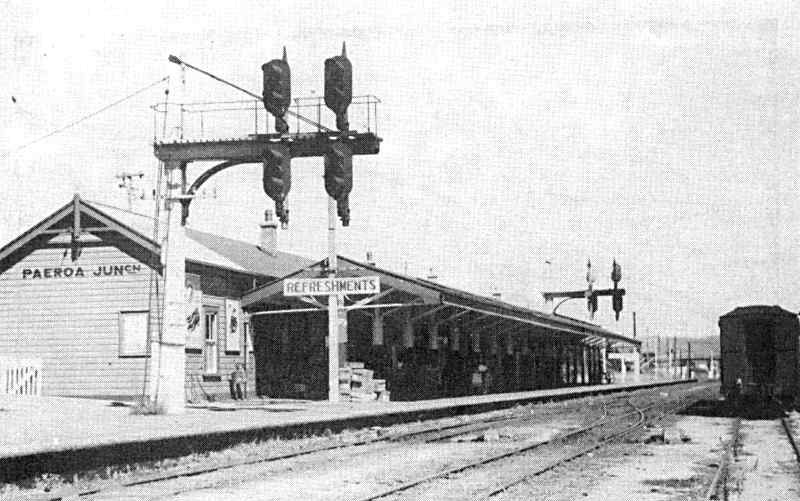 “When several enthusiastic owners of historic boats decided to centre their activities on the Waihou and Ohinemuri Rivers near Paeroa in the mid-1970s they chose a site steeped in the history of the district.

In 1977 the owners of these vessels which were built up to 80-90 years previously and gave service around the coastal and inland waterways of the northern New Zealand, settled on the site of the old Te Puke Wharf as their headquarters. This was the focal point of the shipping industry from the early days of the district, when the only access to Paeroa and Ohinemuri goldfields was by water, that was until 1895 when the railway connected the district to the North Island Main Trunk Line at Hamilton.”

An article on the history of the park was written by Graham Watton for the Ohinemuri Regional History Journal in September 2011. Click here to read the full article.

Water Transport in the Thames Valley

“Long before Europeans came to these shores the Waihou River was used extensively by Maoris who paddled their canoes for long distances. The first white men to enter the estuary were Captain Cook and his crew in 1769 his ship being the forerunner of timber ships and whalers. Then Missionaries came and after them the first white settlers established their isolated homes, the river being their one link with civilization.

Steady progress and prosperity during the first 75 years of European Settlement in Thames Valley District was in a large measure due to water transport via the Waihou River. This navigable highway during that period carried enormous traffic economically, feeding settlers and towns from the Firth of Thames to Matamata.”

An article on water transport in the Thames Valley was written by J. W. Silcock for the Ohinemuri Regional History Journal in September 2011. Click here to read the full article.

The resting place of the P.S. Kopu

The Kopu was built in 1897 by John Young for R. Gibbons, but was purchased by The Northern Steamship Company while building. She was built as a towing launch.

After a long career towing on the Waihou-Piako and Ohinemuri rivers (the Hauraki Plains), this little tug was apparently sunk by vandals while laid up in the Ohinemuri river in the mid 1930s.

She was raised in 1980 from her shallow grave and moved a few yards to where she lays today in the Historical Maritime Park. 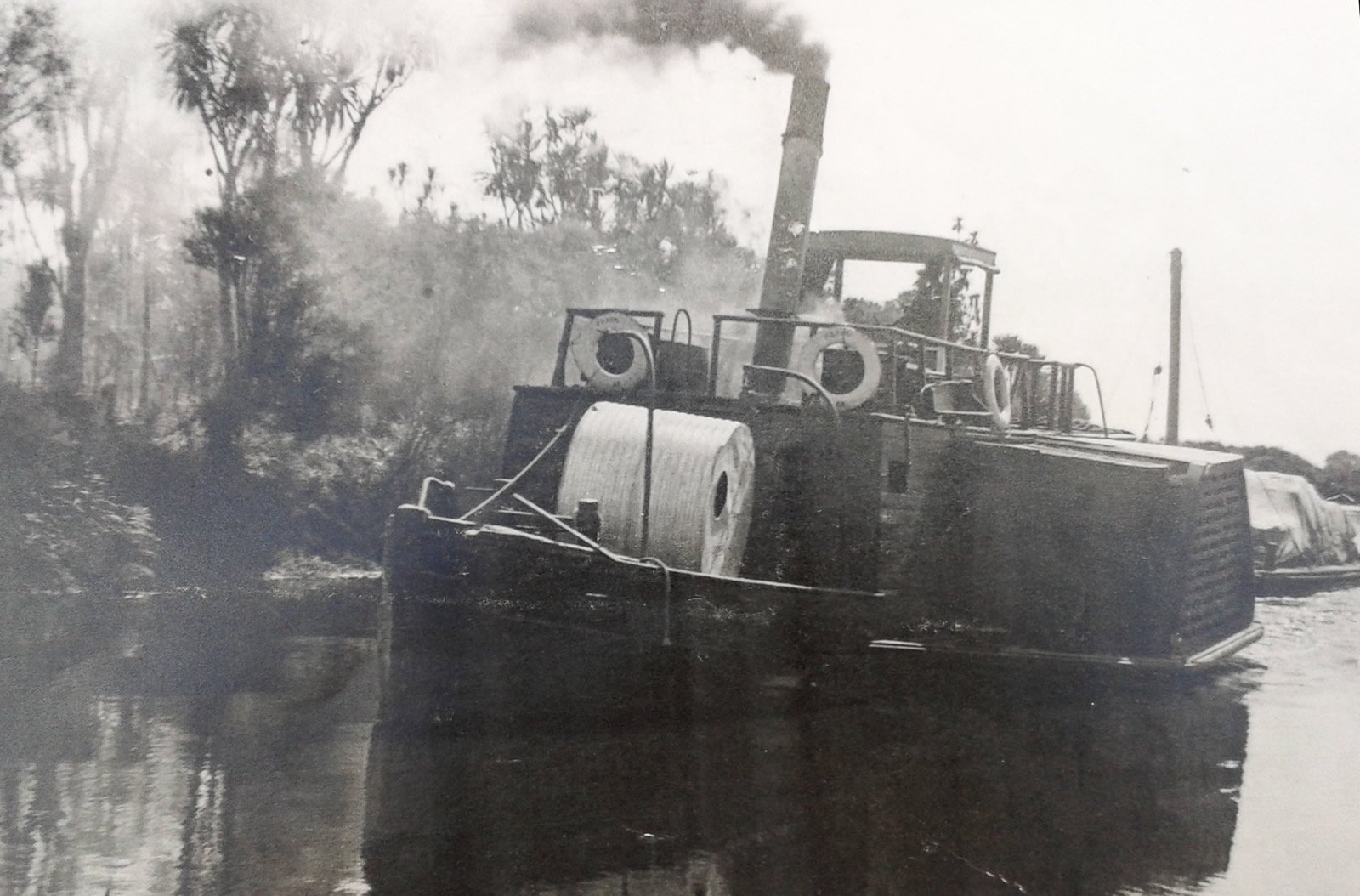 The history of the picnic area has very close ties to the gold mining ventures of this country.

Martha Mining Company (Waihi) owned this site on a miner’s rights lease, until purchasing the freehold title in 1946. They had their own hardstand wharf and gantry, which was used to unload the heavy equipment and cargo from the ships and barges at Puke. 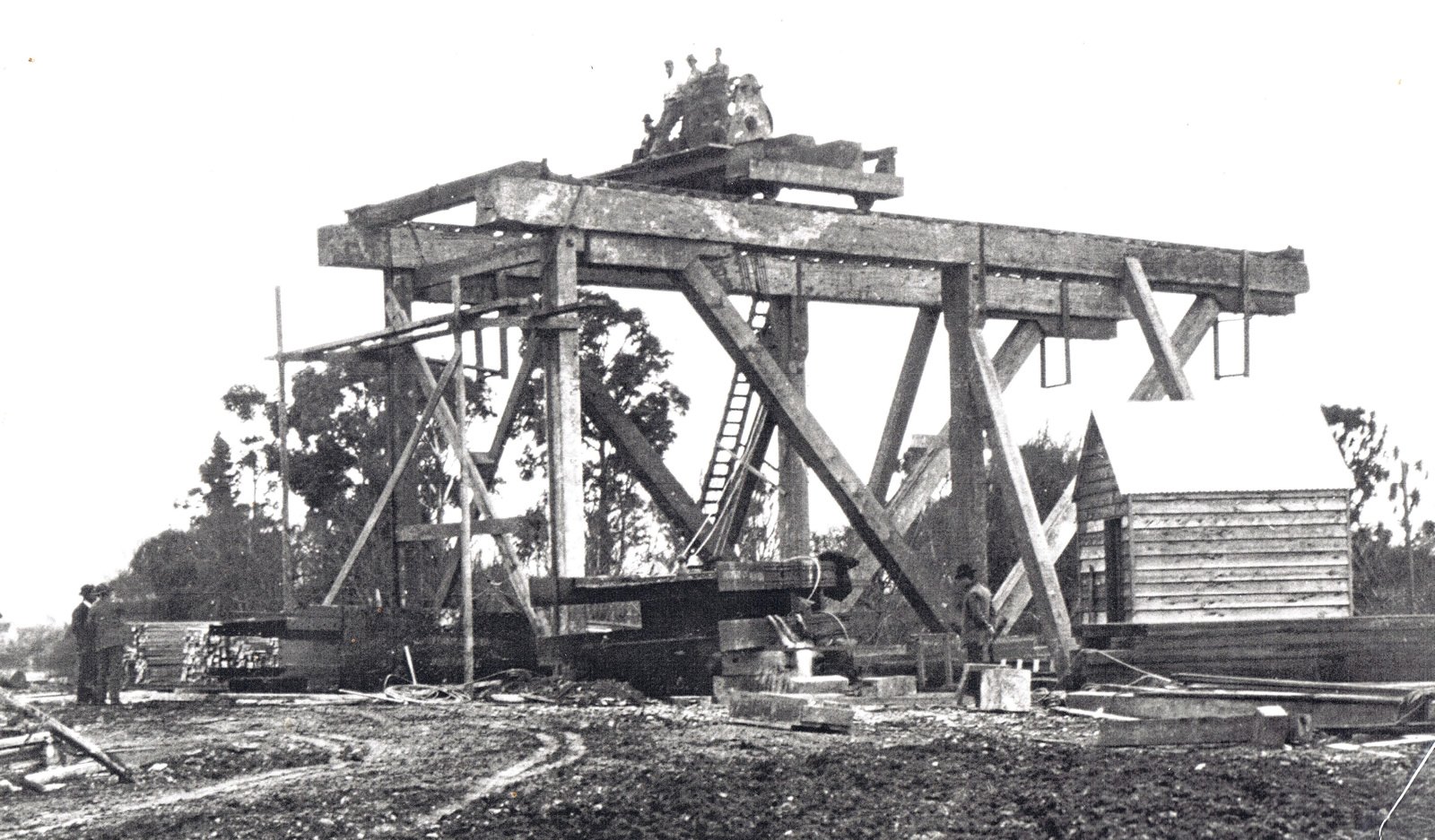 The walk bridge currently in the park was built in 1926 to enable access over the railway lines to both sides of Hill Street and the Paeroa Railway Station.

It was purchased by the Historical Maritime Park Inc. in 1977, and was moved to the site in 1978. 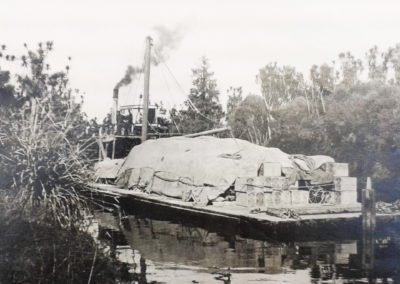 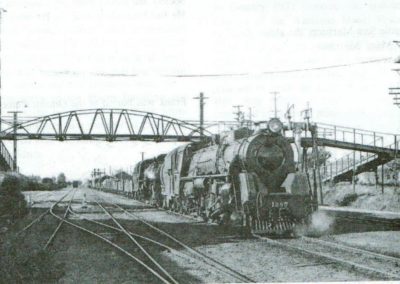 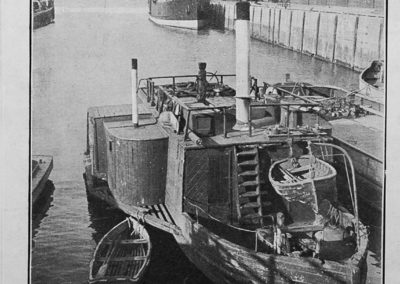 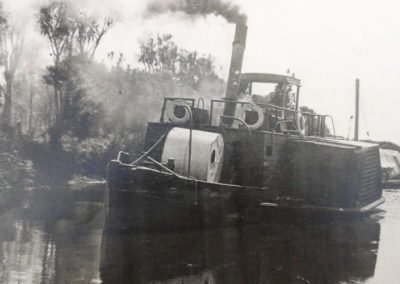 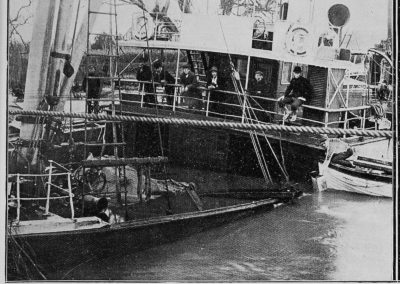 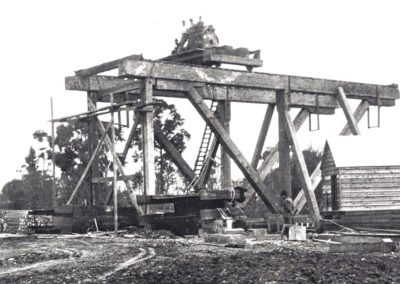 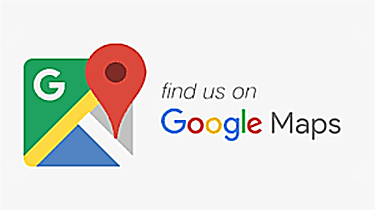